This is a brief description of the camps in which the nurses of Rabaul New Britain were held. For a full description see my up coming book.

Just before the invasion of Rabaul New Britain in January 1942 the six Government Nurses and one civilian woman from Namanula Hospital were evacuated to Vunapope Mission. The six nurses from the 2/10th field ambulance followed with their patients then the mission nurses were slowly brought in. Vunapope was used as a camp to hold the nurses by the Japanese till they were taken to Japan.

After transportation to Japan the Nurses were first placed at the Bund Hotel where the Australians were first introduced to the American Etta Jones from the island of Attu. There is a full chapter on Etta Jones in my book.

In December 1942 the Nurses were transferred from the Bund Hotel to the Yokohama Amateur Rowing/Yachting Club.
Club house address: 7-3 Chome Shinyamashita Yokohama

This is a picture of the clubhouse balcony it is from a YARC 1938 yachting program souvenired by the nurses.
It has been enlarged from a tiny thumbnail picture. It is the only photograph I have been able to find of the club house.

During the war the balcony in the photograph above was palisaded in so that the nurses couldn't look directly onto the harbour. Below this balcony was the water front and boat storage area.

In July 1944 the women were transfered to the old Totsuka Hospital.
The address of the camp was 4573 Izumi-cho, Totuska-ku.
The following photographs were taken in 1949 and are the only ones known to be in existance.

Behind the pine tree on the right of this picture the track leads up to the old Totsuka hospital that was used as the camp.

This picture is taken inside the room (dining room)on the far left of the picture above.

Side view of building. 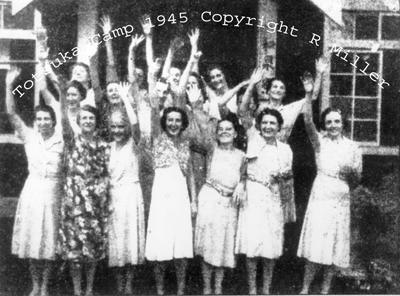 Nurses and Etta Jones standing at front of Totsuka building day after liberation 1945.

The survivors disagree slightly about this floor plan. After 60 years this is only natural.
There was an open space in the middle of the building where the women tried to grow vegtables.